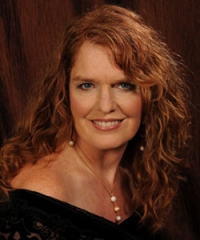 ​Bonnie Brooks, mezzo-soprano, received her Bachelor of Arts in Music from Kenyon College in Ohio and studied voice at the Mozarteum Conservatory of Music in Salzburg, Austria.  She has performed principal roles with Pocket Opera, Cinnabar Opera Company, Northbay Opera, Sonoma City Opera and Redwood Empire Lyric Theatre in such operas as Carmen, Amahl and the Night Visitors, Cosi Fan Tutti, The Marriage of Figaro, The Daughter of the Regiment, The Consul, Candide, and many others.  She was also a member of the San Francisco Opera Chorus for twelve years.

In the musical theatre world, Bonnie has performed in Into the Woods and Sweeney Todd, the title role in Kiss of the Spider Woman, and various musical reviews.  She has given many solo and duet concerts and has appeared as a guest soloist in such works as Handel’s Messiah, Hadyn’s Lord Nelson Mass and Mass in the Time of War, Bach’s St. John’s Passion and Mass in B minor, Mozart’s Requiem,Vivaldi's Gloria, and Beethoven’s Ninth Symphony with such groups as The Sonoma County Bach Choir, The Santa Rosa Symphony, The Sacramento Metropolitan Orchestra,The Oakland Symphony Chorus , The Napa Valley Symphony, and The North State Symphony. Upcoming in October of 2013, she will be featured as the mezzo-soprano solist with The American Philharmonic performing Edward Elgar's Sea Pictures and Samuel Barber's Dover Beach. In September of 2012, Bonnie released a jazz CD  called “You Are The Song In Me.”  Bonnie is an experienced and well-known vocal instructor and coach, teaching at Sonoma State University and at her private vocal studio located in Sebastopol.  She is also co-founder of the Redwood Empire Chapter of the National Association of Teachers of Singing.
Visit Bonnie's Webpage:
http://www.bonniebrooksvoice.com/